Located just one hour’s drive north Butte, of one the most historically significant mining towns in the US, and close to Helena, is Montana’s newest gold rush, and home to the Winston Gold Project.

You don’t want to miss this six-part series featuring Winston Gold Corp., with its CEO Murray Nye and Executive Chairman Joseph Carrabba which is being produced by FMW Media Works and broadcast across Fox Business, Bloomberg, and KRON television.  You will virtually visit the goldmine and be shown the full extent of what is poised to be the hottest gold property since the discoveries at Bannack and Virginia City in 1862 and 1863 respectively.

Winston Gold Corp., trades on the CSE under the symbol WCG and is dual listed on the OTCQB market under the symbols WGMCF is a junior mining company focused on advancing high-grade, low cost mining opportunities into production. Towards that end, the Corporation has acquired an underexplored and under-exploited gold/silver mining opportunity, being the Winston Gold project near Helena, Montana. 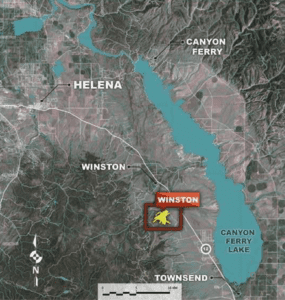 The significance of the Winston Gold Project lies in the fact that it is located only 37 KM southeast of Helena, Montana in a mining friendly jurisdiction with excellent infrastructure and has year-round access due to  paved highways and roads.  The property hosts the past producing high-grade Custer Mine, and past reports indicate that 1.5 ounce per ton gold ore was being produced when the mine closed.  It was mined only to the water table. There is limited modern drilling on this mesothermal vein system.

In order to enter and begin the test mining phase, the Winston Gold Project just closed on just under a $2.5 million private placement which consisted of units containing one common share and one warrant with an exercise price of $.14 per share.

“When I see a person like Joseph Carrabba former board member of Newmont Mining, active board member of NYSE listed Timken Steel as well as TSX -listed AECON and NioCorp with over 42 years of experience in management/operations retire and join a junior mining company it gets me extremely excited.  Coupled with CEO Murray Nye’s insight and leadership, you have all the ingredients to be super successful.” Stated Vince Caruso, President FMW Media Works Corp.

Founded in 2009 in FMW Media Works Corporation created NewToTheStreet.com (NTTS) which is the brainchild of co-founders Vincent Caruso and Stephen Simon. NTTS bridges the gap between traditional road shows and modern-day stock promotion, creating a medium that has been proven to increase market cap, and generate corporate growth to the tune of over $1 billion dollars since its launch.

Filmed in New York City at the NASADQ MarketSite in person with anchor Jane King, NewToTheStreet.com brings the roadshow for the security, whether it be a public company’s stock, or new cryptocurrency right to your living room, through its syndication networks Bloomberg and Fox Business.  Its most recent episode is a crypto montage which includes Featuring fetch.ai (FET), Somee.social (ONG), Sologenic (SOLO), and NativeCoin(N8V).

“We are eager to share the Winston Gold Project story across the 6-part series on New to The Street and feel their network television audience will learn a lot by following along as we reach milestones.” Stated Murray Nye, CEO FMW Media Works Corp. 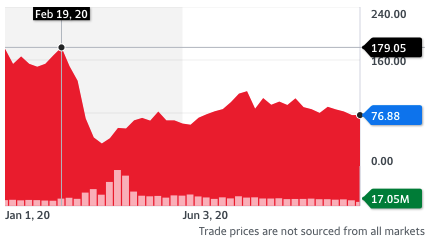 Gold stocks have been correcting in recent months.  While the selloff may not be over yet, one may still find themselves challenged to find value in the space.  Daily Gold miners Index Bull & Bear 2X shares (NUGT and DUST, respectively) are a key indicator of the space.  With holdings such as Newmont (NYSE: NEM), Barrick Gold (NASDAQ: GOLD), Franco Nevada (NYSE: FNV), Newcrest Mining, Wheaton Precious Metals (NYSE: WPM), and more, there might not be a more accurate barometer for the space.

Winston Gold Corp. (OTCQB: WGMCF) could be a bit premature to be targeted and accumulated by a major fund, but if location, history and means area any indicators, it has a good shot.

Filming is beginning this week and air dates and times will be announced soon.

We will send you periodic updates on upcoming episodes, press releases, interviews and more!

New to The Street is one of the longest-running US and Internationally sponsored T.V. shows along with its sister show “Exploring the Block” which is focused on Blockchain related news. It has been running across many U.S. Television networks and has been the one-stop place for every blockchain and cryptocurrency-related news since 2009. The show is operated by FMW Media Corp. which also handles its Twitter account and website.


Learn More
The TV program provides the CEOs or executives of a company with a platform to explain to the audience about their company, their product, goals, roots, visions, and more. Each episode contains a series of interviews conducted with founders and top executives of different companies. This questionnaire format provides the viewers with an inside look of the company’s functions, its business model, events that made the company what they are today, and their plans for the future. This gives a potential investor lot of data and information helping them decide whether they want to invest in the company and its product or not. A dialogue with the top decision-makers of a company clears various doubts any investor might have and instills a bit more confidence in their investment.
New to The Street focuses on small and mid-cap companies who are seeking to get the word out about their company and could benefit from a platform such as this. This medium helps in increasing investor awareness in a company providing them with funds and connections that will be helpful for the future. Apart from interviews, New to The Street also provides the latest news and happenings about new products, public company profiles, economic analysis, and a blend of business and financial services news which a viewer can follow and learn all they want about a particular company.

New to The Street is an informative show which keeps people updated but they can also follow its Twitter page or the website to get more information about a company or a digital asset. The website contains interviews with several different companies giving an insight into their company and explaining what the product is. Other videos show some of the most recent news related to Blockchain or cryptocurrency. You can also see the upcoming shows that will be airing nationwide on major networks.

The website has been the go-to place for people who want to stay updated with everything happening in the blockchain ecosystem, latest news about different companies, videos of interviews with executives of the companies, read its informative blog containing a lot of different articles, or keep a look at quotes of all the different digital assets available in the market.

The Digital Assets Quote contains a list of all the cryptocurrencies up for trade. It shows the current price at which they are being dealt, the changes that occurred in the past 24 hours, week, month, and year. It even tells you the market cap of that particular cryptocurrency, its volume, and available supply. It is one of the most comprehensive and complete lists of all the cryptocurrencies so that an investor can take advantage of all the information they have in their hands to make a potentially profitable trade.
New to The Street is valuable not just for the investors or the companies featuring on it but is beneficial for the whole crypto community as well. There is still a lot of misinformation and lack of awareness about blockchain and cryptocurrency around the world and New to The Street along with the show Exploring the Block is helping to break the stigma surrounding the technology. The show provides a stage for companies to market and advertise their product and services to the general public. Not only does it spark interest in an investors mind about the company, but it also makes people more knowledgeable about the technology, how it works, and how companies are using it to their advantage. In this way, New to The Street becomes strategically positioned to team up with publicly traded companies, initial public offerings, and investor relation firms to provide increased outbound investor marketing and acting as an extension to their investor relations services. FMW Media Corp, the company producing New to The Street gets compensated in the form of Tokens or shares of restricted stocks of the company profiled on the program.

From an investor’s perspective, New to The Street arms them with all the right tools needed for making a strategical decision about investing in a certain company or digital asset. Instead of jumping from site to site doing research, they can get all the information regarding the business model of a company, the values, and principles it was founded on, people that are behind the teams, and what is the future of that company. In addition to the company background, they can monitor the asset’s past activity as that is a key factor as well.

We produce and broadcast client commercials across the entire FMW Media eco-system.

What’s New to the Street?

Originally posted on EmergingGrowth.com Combining machine learning and the blockchain, Fetch.AI aims to deliver best-case health outcomes for medical patients Since the dawn of the computer...
Read more

Covid-19 Vaccine is here. Where can you still find Value in Biotech?

Originally posted at https://emerginggrowth.com/the-wild-west-2-0-montanas-newest-gold-mine-in-six-parts/ Pfizer (NYSE: PFE) just announced results that could pave the way for a covid-19 vaccine by year end. An article in Bloomberg stated: “The...
Read more